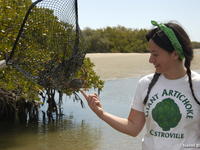 The estuaries along the Sonoran coast are incredibly rich in biodiversity and hold a very high importance as nurseries for hundreds of species of invertebrates and fish, many of which are harvested commercially. Migratory and resident birds use these estuaries as stopover, wintering, feeding, and breeding sites. Additionally, coastal wetlands are the only suitable habitat in Sonora for certain federally protected species like the Clapper Rail (Rallus longirostris). There are three small to medium-sized estuaries on the central Sonoran coast south of Bahia Kino: Esteros Santa Cruz, Cardonal, and Tastiota. These precious coastal environments are increasingly threatened by development and tourism activities. Since 2000, the shrimp aquaculture industry has expanded dramatically along this coastline.  These estuaries have received little research or conservation attention while aquaculture has rapidly encroached on these sensitive and unique ecosystems.

Prescott College is promoting effective and collaborative estuary conservation and research efforts by working with academic and government organizations (University of Sonora, CONANP, SEMARNAT, PROFEPA) and community groups to identify the principal environmental issues and define objectives and strategic actions to achieve increased protection of these estuaries and sustainable development of the communities that surround them.

Laguna La Cruz was designated as a “Wetland of International Importance” on the second of February, 2013 by the Ramsar Convention. This designation was achieved through collaborative efforts of The Kino Bay Center, Tthe University of Sonora and The National Commission for Protected Areas (CONANP). The designation created the foundation for future conservation efforts and opened opportunities for community participation through the development of sustainable projects that benefit the local community.

Laguna La Cruz is a Coastal wetland with red and black mangroves and sand dunes stabilized by vegetation that is native to the Sonoran Desert which provide habitat for:

Laguna La Cruz also has significant cultural importance as it holds archaeological sites of encampments of the indigenous Comcaac people.

The Kino Bay photo database is a searchable and diverse collection of ... Learn more